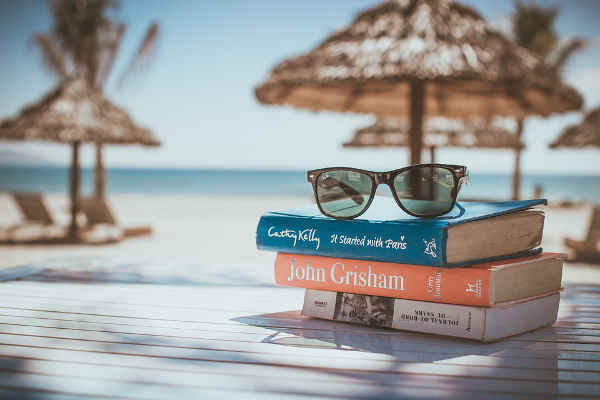 Reading is one of the main activities we do on the beach in Summer. And it is also one of those activities that allow you to improve your foreign language knowledge, sure provided that your book is written in a different language.

But sometimes, it can be difficult to choose books in Italian or in any foreign language for the simple fact that you usually don’t know any foreign author.

So, in this article, I want to share with you six different books in Italian to both improve your Italian and relax under the beach umbrella.

Poche parole, moltissime cose is a book written by Rossella Milone in 2013.

This Italian book is about love and realization. Olga and Sergio, two old people, fall in love. But Olga’s family doesn’t like this relationship.

When Olga’s family comes back from the holidays, Nanà, Olga’s grandchild, is the first to realize that her grandmother isn’t at home: she fled with Sergio.

Now that both Olga and Sergio have decided to go away, without even leaving a note, their absence weighs like lead weight on the conscience of Olga’s family, as if it was because of them – of the fact that they didn’t like her relationship with Sergio – that Olga decided to leave.

So, both Olga’s and Sergio’s families go in search of them. But what they do not know yet is that during this search, the certainties both families have will start to vaporize and all the problems they have will be brought up to the surface.

Il segreto del sogno is a crime novel written by Annunziata Brandoni in 2015.

Antonietta Baldi is a sixty-year-old Italian detective. While she’s investigating on a new case, the murder of a prostitute, the nightmare that has tormented her when she was a child and a teenager suddenly comes back. But why? What kind of link might her mother’s death have to do with the case she’s working on now?

Detective Baldi decides to reopen her mother’s case and to investigate, but the truth will cause her a lot of pain.

When Luigi was 4 years old, he was playing with two friends in his grandfather’s house. A moment later, they found his grandfather’s gun and without even know how, it went off. The bullet hit Luigi straight in the head. Luigi was immediately brought to a hospital and operated. But the surgeons weren’t able to extract the bullet. Despite this, Luigi survived.

But now he’s considered a disabled person and has to face a lot of psychological pain and injustices.

Luigi doesn’t ever give up and thanks to his strength he will be able to find the of joy of life again.

L’amica geniale is an Italian book written by Elena Ferrante in 2011. It’s the first of four books that follow the friendship between Lila and Elena during their whole life.

In l’amica geniale, the author focuses on both the childhood and the adolescence of Lila and Elena, two girls that were born and grew up in the Neapolitan suburbs.

She gives us details about their friendship, their way to influence each others, about their individual growth, their feelings, and she tells us their secrets.

Lila and Elena’s story is told while highlighting also the changes that happen in Naples.

If you happen to like this book, you can also read the other books of the series Storia del nuovo cognome, Storia di chi fugge e di chi resta, Storia della bambina perduta.

The main character of this book is Federico, a seventeen-year-old boy from Palermo. After the end of the school Federico is about to leave for Oxford for a study trip when he meets 3P, a father and a teacher of religion.

3P persuades Federico to do some voluntary work  in the suburbs of Palermo before leaving for Oxford.

Federico agrees and during this experience he will discover a whole new reality. A reality made of good people, desperate people, violence, robbery, Cosa Nostra, etc. A reality that will change his life forever.

Matti e Mattia is an Italian book written by Alessandro Casagrande in 2015.

The mental hospital of San Servolo sees the arrival of a new director. He seems to be different from his predecessors and seems to have unconventional ideas on how to treat patients.

The most dangerous patient of the whole mental hospital, Zero, is one of the firsts to experience the new director’s strange methods.

In fact, from one day to the next, he is forced to share his room with Mattia, an enthusiastic eight-year-old boy with language deficiency.

But why has a child been sectioned in a mental hospital? And are the new director’s methods really for the best of his patients?