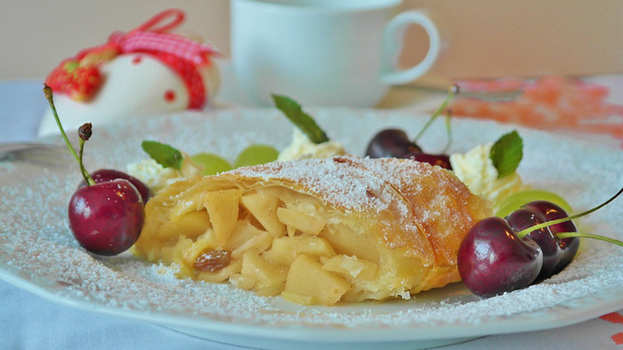 As you will certainly know, Italy is especially famous for its cuisine. Italians abroad have usually the reputation of being excellent cooks. Indeed, even the worst Italian cooks seem to be able to create delicious dishes.

Today, I want to share with you the history and the recipes of six famous Italian desserts.

Babà is one of the most famous Italian desserts of Naples. It’s an oven-baked small cake made with eggs, milk, butter that is then soaked in rum or limoncello liqueur.

Babà is usually shaped like a small mushroom and sometimes it’s also filled with pastry cream.

Even if babà is considered a Neapolitan dessert, in reality, it was Stanislaus I, king of Poland, who created it.

Later on, babà was brought to Naples by some French cooks. Since then it’s considered a typical Neapolitan dessert.

Nowadays babà can be generally found in almost every Italian pastry shop.

If you want to try to cook babà at home,you can follow this video recipe:

Brutti ma buoni, literally ugly but good, are typical Italian biscuits from Gavirate, a city in Lombardy. These biscuits are usually made with meringue and roasted hazelnuts, nuts or almonds.

The original recipe was probably created by Costantino Veniani in the XIX century. Veniani, a pastry chef, opened with his wife Giuseppina Anderwill a patisserie and there he started to bake and sell these biscuits to everyone, even to great personalities like the queen Elena di Savoia, Giosuè Carducci and Giuseppe Verdi.

If you want to cook brutti ma buoni at home, have a look at this video recipe:

The word strudel is German and means whirlpool. This name recalls the structure of this dessert, which is generally filled with apples and raisins and then rolled.

A piece of advice. Usually, it’s better to use Renetta Ruggine apples since they don’t have much water and so they don’t soften the dough.

If you want to cook strudel at home, have a look at this video recipe:

If you like chocolate, you should try torta caprese. Torta caprese is an Italian cake from Capri. The peculiarity of this cake is that it has no flour. In fact, it’s made with butter, sugar, yolks, almonds, walnuts and chocolate.

The result is a delicious sweet cake with a hard thin shell and a soft and moist interior.

What? You can’t wait to cook it? Here’s the video recipe:

Sfogliatella is one of the most famous Italian desserts in America. In the U.S.A Italian sfogliatella is mostly known as lobster tail. It’s a pastry shaped like a shell and usually filled with ricotta and other ingredients like chopped candied fruits.

A dessert similar to sfogliatella was originally created in the monastery of Santa Rosa, near Salerno during the XVIII. It was called Santarosa, like the monastery.

However, in the XIX century, a Neapolitan pastry chef named Pasquale Pintauro acquired the original recipe and slightly modified it, creating sfogliatella. Then, he began to sell sfogliatella in his shop.

Sfogliatella is a very tasty dessert but it’s really very difficult to cook at home.

If you want to try it anyway, here’s the recipe.

Chocolate salami is one of my favourite italian desserts for the Summer.

It’s made with butter, sugar, eggs, dark chocolate, rum liqueur, and cookies. This dessert is called salami because of its aspect. Indeed, in addition to be shaped as a long cylinder, it’s also served into slices. In this way, the chopped biscuits are well visible and resemble the white flecks of fat in salami.

Chocolate salami is really easy to prepare. Have a look at this video recipe:

If you’re interested in more Italian recipes you can have a look at my book Sos Italian cooking.

You can also have a look at my previous articles about Italian regional cuisine: Italian Cooking – Piedmont, Traditional recipes from the Marches, Italy, Four traditional Italian recipes from Friuli.

Did you already know these six famous Italian desserts? Have you ever tried them? Did you like them?