What can you do if you’re spending Halloween in Italy? Are there some special events or should you resign yourself to having a boring night? 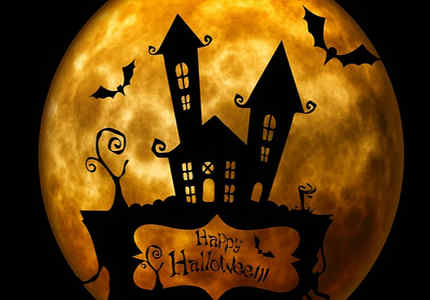 As you know quite well, Halloween is a typical American custom. However, it seems that in the last years, Holloween is spreading more and more in Italy too.

For example, not many years ago if you entered a supermarket you found costumes for sale only for Carnival. Nowadays, you can find costumes for Halloween too, together with pumpkins to carve, and sweets shaped like mummies, ghosts, or skulls.

But Halloween is not spreading only in big cities, it’s spreading in small villages too.

Last year my fiancé and I were driving home after two days of hiking in the mountains. It was the 31st of October. When we entered a really small mountain village, I remember we saw a group of children, aged 10 or so, walking down the streets dressed like ghosts, zombies, mummies, vampires, and carrying a little basket.
“Li hai visti? Che carini! Stavano festeggiando Halloween! – Did you see them? How cute! They were celebrating Halloween! –” I told my fiancé half surprised and half amused.
“Sì, cosa c’è di strano? –Yeah, what’s strange about it? ”, he promptly replied me.

He was right, there was nothing strange about it. It was just that Halloween is not an Italian tradition and, honestly, I didn’t imagine it would ever invaded small mountain villages too. I was clearly wrong.

So, that day I made a mental note to check how Halloween is celebrated in Italy.

Halloween in Italy is far from being similar to the one celebrated in the U.S.A yet. However, some special events are organized for this period.

Urban trekking usually includes night visits to towers, castles, crypts and so on. Some walks are also organized for children during the afternoon.

It’s an event organized in many big cities like Milan, Turin, Rome, etc. You have dinner, someone is killed – not for real, obviously – and you play detective searching for the murderer.

A NIGHT IN A CASTLE

In many big cities like Parma and Piacenza, you can spend the whole night in a castle surrounded by a Halloween atmosphere. Some special events are organized during the night, included candlelight visits.

These are just some ideas of what you can do if you want to spend Halloween in Italy.

But do Italians have their own way to celebrate the dead?
Actually, yes, they do.

Italians celebrate the dead with la festa dei morti – literally, the feast of the dead – that usually takes place the 1st of November.

The tradition linked to this feast changes from region to region or even from city to city.

In Milan, for example, it’s tradition that people visit cemeteries and bring a vase of chrysanthemums – symbolizing the death in Italy – to the graves of dead relatives and friends.

Moreover, in this period there is the custom of cooking, or simply eating, a delicious sweet called pan dei morti – literally, the bread of the dead. Here is the recipe:

Preparation
1. Soak the raisins in warm water for 30 minutes. Drain them and dry with paper towels;
2. Sift the flour and the cocoa powder, and add them to a big bowl;
3. Add also crunchy biscuits, amaretto biscuits, ladyfingers, pine nuts, dry figs, sugar, cinnamon, the raisins and stir;
4. Finally, add baking powder, Vin Santo, egg whites and stir to amalgamate. You should get a solid dough;
5. Preheat the oven to 180° C;
6. Place a sheet of baking paper on a baking tray;
7. Shape the dough into an ellipse 13×7 cm. Then, cut slices 1 cm thick and place them on the baking pan, spacing them out at least 2-3 cm;
8. Bake for 25/30 minutes;
9. Leave pan dei morti to cool. Sprinkle with icing sugar and serve.

Have you already spent Halloween in Italy? How did you celebrate it?

Ti voglio bene – How to show affection in Italian
Next Post: Ten Italian idioms about animals