Pizza is the most famous Italian dish in the world. But what are the origins of this deliciousness?

The first documented usage of the word pizza dates back to 997 AD. At that time, pizza was slightly different from the 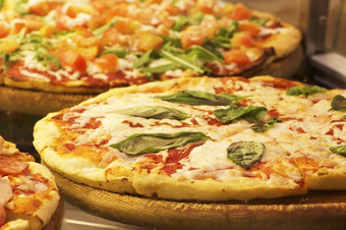 one everybody knows. In fact, it was a simple flatbread either with no topping, or usually topped with spices, cheese or meat.

Then, after 1700, when tomatoes were finally considered eatable, Italians started to use them as a topping for flatbread. However, it was not until 11 June 1889 that the most known Italian pizza, pizza Margherita, was baked.
Indeed, according to the legend, in 1889, the Neapolitan cook Raffaele Esposito decided to garnish pizza with tomatoes, cheese, and basil – the colors of the Italian flag – to honor the queen Margherita of Savoy.

The largest Italian pizza was prepared by Dovilio Nardi, Andrea Mannocchi, Marco Nardi, Matteo Nardi and Matteo Giannotte in Rome in 2012. It measured 1,261.65 m² and was named Ottavia, as a homage to the first Roman emperor Octavian Augustus.

The most expensive pizza

The most expensive pizza is an idea of the Italian pizza maker Renato Viola. It is called Luigi XII, and it is seasoned with specially selected expensive ingredients such as three types of caviar, lobsters, prawns, Cognac, Champagne, etc. You can have it for 8.300 €.

One of the most known Italian pizzas is Neapolitan pizza. Since 2010, Neapolitan pizza is a Traditional Speciality Guaranteed Product – to know all the other EU food labels available, read how to recognize fake Italian food (Part 1). This means that it is produced using traditional methods and/or that it has a traditional composition.

Those of you who love cooking, Neapolitan pizza, and have a wood-fired oven, may attempt to prepare Neapolitan pizza following the traditional recipe. You can find it in the Eu regulation N.97/2010. This regulation states all the requirements authentic Neapolitan pizza must have and explains the whole production method. Let me know how it goes!

Instead, those of you who prefer a much simpler but still delicious home-made pizza, can follow Gennaro’s recipe, explained in the video below. You can cook the pizza in a wood-fire oven, or you can bake it for 15-20 minutes at 250° C.

What about you? Have you ever tried authentic Italian pizza? What do you think about it?
Do you have a personal Italian pizza recipe that you want to share? Write me, and I’m going to publish it.