Colosseum is one of the most popular tourist attractions in Rome. Its construction begun in 72 AD under the emperor Vespasian, and was then completed in 80 AD under his successor Titus.

It’s estimated that colosseum could hold at least 50.000 spectators. Due to its large capacity it was also structured in such a way that it could be evacuated quickly in case of need.
Indeed, it was composed of 80 different entrances. One of these was reserved to the Emperor, three to the roman elite and the remaining seventy-six were for common spectators.

Spectators sat in different areas according to their place in society. So, the seats at the bottom, the ones offering the best view, were reserved to the most important roman people – the emperor and his vestal virgins was provided with special distinct areas. Next to them there was an area for senators. Above it, there was the area reserved to nobles or knights. Finally, there was an area for wealthy citizens, one for poor citizens, and one for slaves and women. 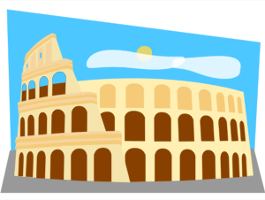 The arena was 84 x 48 meters and was used for entertainment purposes. Romans organized representations of natural scenes – with real trees and animals – both to educate citizens and to use these scenes as background for hunting shows. Moreover, the arena was used to host gladiatorial shows – remember the famous movie the gladiator? – and public executions.

Near the colosseum there were other important buildings whose remains are still visible. One of these is Ludus Magnus, the building where gladiators used to train.

From the Middle Ages on, colosseum wasn’t used for entertainment purposes anymore. In it, it was build a church and the arena was used as a cemetery. Years later, some sectors of the seating areas were instead rented to be used as workshops or housing.

Since the fall of the Roman empire, colosseum has been damaged by natural agencies, and many of its stones have been used to rebuild other Roman buildings such as Palazzo Venezia, Palazzo Barberini and Palazzo Cancelleria.

Nowadays, colosseum can be visited every day – except the 25th of December, the 1st of January and the 1st of May – from 8.30 am. Tickets cost 12€, they are good for two consecutive days, and comprise also the visit to Foro Romano and Palatino. Tickets for European citizens from 18 to 25 years cost 7,50€. Finally colosseum can be visited freely the first Sunday of every month. For other information, please visit the official colosseum website.

What about you? Have you already visited colosseum? What do you think about it? Do you have any suggestions for future tourists? Feel free to post your opinions below.