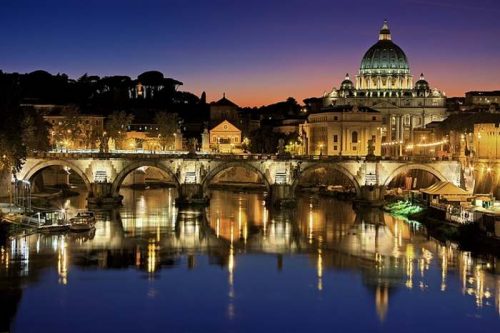 Have you ever visited Italy? Where have you been? Maybe in one of the most famous Italian cities like Venice or Rome? Or you’ve visited one of the isles, Sicily, perhaps?

Ok. You know where to go to have fun and see historical sites. However, I’m pretty sure you still don’t know that in Italy you can find some weird places too.

If you’ve ever been in Rome, you’ll now know that there is a pyramid there. Yes, a real pyramid!

The Roman pyramid is located near Porta San Paolo and dates back to the 12 BC.

The pyramid was an idea of Gaius Cestius, a Roman magistrate, who wanted it as his tomb.

Strange, isn’t it? Not so strange if we think that Egypt was part of the Roman Empire and that in that period Romans had a fad for everything that was Egyptian.

The pyramid is 37 meters high and is made of brick-faced concrete and some slabs of marble.

The interior is simpler than Egyptian pyramids. Indeed, there’s only one chamber, the burial chamber.

The pyramid was opened for the first time in 1660. In that occasion, it was clear that it had already been plundered sometime in the past. The only things remaining were the frescoes.

Nowadays, only few frescoes survive. You can visit the Roman pyramid each month, on the third and the fourth Saturday and Sunday, except in August because it’s closed. For more details visit Cestia pyramid.

The Church of Saint Mary of the prayer and death

The second and last of the weird places in today’s list is this Church located in Rome, near Palazzo Farnense. It was built in 1575 but it was then completely rebuilt in 1733 by Ferdinando Fuga.

This is surely one of the most peculiar churches standing in Italy.

In fact, if you look closely at the facade, you can see that it’s decorated with symbols recalling death, like hourglasses, winged skulls, and skeletons.

When you get inside the Church, you find many valuable art works such as frescoes and sculptures, all recalling death and life after death.

Finally, there’s also a crypt decorated with human bones. There are many skulls, a cross adorned with skulls, and candelabras built with bones.

Why is there such a Church in Rome?

Well, because of the role this church had in the past.

This confraternity took the responsibility of burying all the John and Jane Does who died in the Tiber or in the countryside in Rome.

The burials took place in their cemetery, that was not far from the church. So, this Church has basically the role of celebrating the deads.

Have you visited one of these two weird places in Italy? What do you think about them?