They say when in Rome, do as Romans do. However, travellers know quite well that there are also some behaviors they should avoid if they don’t want to be labeled as tourists.

So, for those of you visiting Italy, I’ve decided to write a brief not-to-do list:

1. Don’t use ciao to greet someone you don’t know, or in situations requiring formality. Use buongiorno (good morning) or buonasera (good evening), instead.
2. If you’re invited to someone’s home, don’t bring chrysanthemums as a gift. These flowers symbolize death in Italy.
3. Don’t do this gesture. 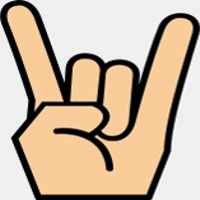 This means cornuto (your wife cheates on you) and is an insult.
4. Don’t say ti amo to a woman/man unless you’re in love with her/him. To say I love you to a family member or a friend you say ti voglio bene.
5. Don’t use the familiar form tu to refer to people unless they are friends or they invited you to do so. Use the polite form lei, instead.
6. Don’t decline an invitation, except if you have a good reason to do so. It’s considered rude.
7. Don’t be disgusted if Italians kiss you on your cheeks. This is a very common way to greet someone in Italy.
8. Don’t give red roses to a girl as a gift unless you are in love with her.
9. Don’t wear socks with sandals or slippers if you don’t want to be labeled as tourists: Italians do not.
10. Don’t be late to a meeting. It doesn’t make a good impression.
11. Don’t drive on the left: Italians drive on the right.
12. Don’t ask for a cappuccino after a meal. Italians generally drink it in the morning or in the afternoon. Ask for a coffee or bitters (amaro), instead.
13. Don’t ask for Parmesan if you’re eating fish dishes – pasta included. Italians usually don’t mix cheese with fish.
14. Don’t smoke in public spaces – indoors. It’s prohibited, unless they have separately ventilated smoking rooms.

Finally, two things that, despite some blogs keep telling you not to do, can actually be done.

15. Leaving the table for some time during dinner. It’s actually considered a little bit rude. However, if you need to, just say scusatemi un momento (excuse me for a moment) and leave.
16. Eating with your fingers. This depends on the type of restaurant where you are eating. If it’s a fancy restaurant, then use fork and knife. If it’s not, just use some common sense. It’s ok to eat pizza’s crust or mussels with your fingers, it’s not to eat pasta or fish in the same way.

Have you already been to Italy yet? Have you noticed some other things to add to the not-to-do list?
Feel free to share your thoughts below.