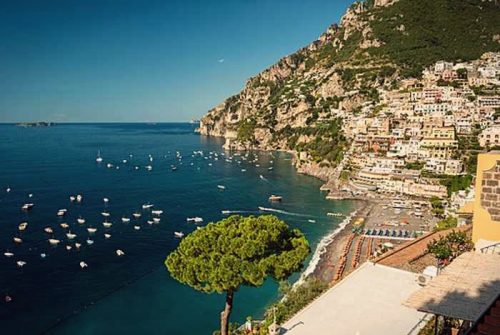 Summer is approaching and it’s time to think about where to spend your holidays.

If you like Italy and the sea, in this article I’m going to make a small list of some of the most beautiful coastal towns to see when in Italy.

All these beautiful Italian coastal towns have wonderful sea, breathtaking views and even cultural sites to visit.

Among the many beautiful Italian coastal towns, Camogli is surely one of the most known.

Camogli is a small Italian coastal town in the Liguria region and is part of the Portofino Marine Protected area.

The town of Camogli is particularly known for the colorful houses that line the beach.

In the past the town lived mainly from fishing and the different strong colors of the houses helped fishermen to find their way back to the port.

Camogli isn’t only a feast for the eyes but it also offers many cultural places to visit.

Indeed, some of the best cultural places you can see in Camogli are San Fruttuoso Abbey, Millenaria Church, and Dragonara Castle.

Moreover, if you like walking surrounded by nature, in Camogli you’ll find plenty of trails among which you can choose.

Positano is a small Italian coastal town in the Campania region.

At the beginning of the 20th century, Positano wasn’t overrun by tourists. Its fame began to increase during the ‘50s, especially after John Steinbeck decided to write an essay about the beauty of Positano.

If you go and visit Positano remember to have a look at the Saracen towers and at the church of Santa Maria Assunta, which hosts a Byzantine icon of a black Madonna dating back to the 13th century.

Ravello is another of the many beautiful Italian coastal towns you can visit.

Also Ravello is in the Campania region and it’s also part of the UNESCO World Heritage Sites – if you want to know other UNESCO sites in Italy, have a look at UNESCO world heritage sites in Italy.

In Ravello there are many things to see like the Cathedral of Ravello, the church of San Giovanni del Toro, and Villa Rufolo.

Santa Cesarea Terme is a small Italian coastal town in the Apulia region. It sists atop a plateau overlooking the sea.

The waters of Santa Cesarea Terme thermal baths have a temperature that stays under 40 °C, the perfect temperature for therapeutic purposes. They are perfect to treat respiratory, dermatological, arthritic and even rheumatoid problems.

If you visit Santa Cesarea Terme, have also a look at the Church of Madre del Sacro Cuore, Villa Sticchi, and the many coastal towers, which date back to the XVI century.

Have you already visited these four beautiful Italian coastal towns? Did you like them?