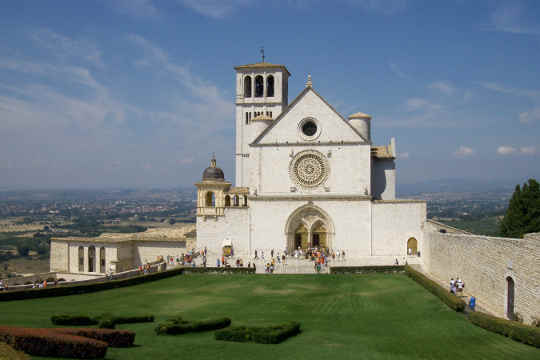 But maybe only few of you know that Italy has also the highest number of UNESCO sites.

So, with this article, I’m starting a new series about the world heritage sites in Italy.

Almost every region has a good number of world heritage sites in Italy. Today, I’m going to talk about the Unesco sites you can find in Umbria.

BASILICA OF SAINT FRANCIS OF ASSISI

One of the most important world heritage sites in Italy, in Umbria is the Basilica of Saint Francis of Assisi.

This Basilica has been a UNESCO world heritage site since 2000 and it’s visited  by many Christian pilgrims every year.

The construction of the basilica began in 1228, right after the canonization of Francis. It was built into the side of a hill.

At the time, this hill was known as the Hill of Hell because it was the place where criminals were put to death. After the construction of the basilica, the name of the hill was changed into Hill of Paradise.

The basilica comprises two churches: the Upper Church and the Lower Church.

Both churches have a great cultural importance since they both present many frescoes painted by different artists such as Giotto, Lorenzetti, Cimabue, etc.

The remains of St. Francis were brought to the Lower Basilica and once there, they were hidden to prevent thieves from stoling them.

St. Francis’ remains were then found in 1818. So, Pope Pius IX ordered to build a crypt and to put them there so that the faithful could visit the Saint.

Next to the Basilica there’s the Friary of St. Francis. It’s made with pink and white stones from Mount Subasio and it’s built in a Gothic style.

Nowadays in it you’ll find a library and a museum with all the works of art donated by the pilgrims.

PAPAL BASILICA OF SAINT MARY OF THE ANGELS

The Basilica of Saint Mary of the Angels is a church in Santa Maria degli Angeli, a small village near Assisi.

This Basilica was built from the 1569 to 1679 around a 9th century little church called Porziuncola. The Porziuncola is the place where Saint Francis of Assisi received the call of God and decided to renounce to his wealth to live in poverty.

The interior of the Basilica as well as the interior of the Porziuncola is very simple. However, it presents some frescoes painted by many different artists like Ventura Salimbeni, Francesco Appiani, Ilario daViterbo, and Pietro Perugino.

In the Basilica of Saint Mary of the Angels you can still visit the transito, the room where St. Francis died in 1226.

In it you’ll find a small altar with the rope of the saint, a terracotta statue of St. Francis by Andrea della Robbia and a fresco by Giovanni Spagna.

Finally you can see the rose garden, the rose chapel – the place where St. Francis used to pray – and the museum of the Porziuncola, which houses both paintings, and religious and archeological objects.

The Temple of Clitumnus is a paleochristian church in Campello sul Clitunno that became one of the UNESCO world heritage sites in Italy in 2011.

A long time ago the Temple of Clitumnus was a pagan shrine dedicated to the river god Clitumnus. Back then, this shrine was very popular and attracted many people who wanted to consult the oracles of the god Clitumnus.

This temple was converted into a Christian church probably during the 4th century, using materials taken from villas and mausoleums.

Nowadays, inside the temple of Clitumnus you can see the traces of two of the oldest frescoes in Umbria, dating back to the 8th century.

Other UNESCO world heritage sites in Italy, Umbria are The basilica of San Salvatore in Spoleto, San Damiano in Assisi, The convent of Saint Clare and the Eremo delle Carceri.

Have you already visited these UNESCO world heritage sites in Italy? What do you think about them?