If you want to do an escorted tour to visit Italy’s magnificent works of art and monuments,

sooner or later, you’ll probably have no option but to visit public restrooms. Now, due to the large number of tourists, toilet paper runs out pretty soon. To overcome this problem, Italian women bring always with them at least a pack of tissues. You’re strongly recommended to do the same.

English is one of the most spoken languages in the world and everyone knows that its knowledge becomes fundamental when travelling. For these reasons, English is taught both in primary and secondary schools in Italy. Now, you’re probably thinking: “that’s great! When I go to Italy, I can simply speak English!” I’m sorry, you’re wrong. Despite English being a compulsory subject in schools, not many Italians can really speak and understand it. So, bring with you a good dictionary and/or learn at least some Italian words and sentences.

Remember that Italians either don’t queue in a normal way or simply don’t queue at all.
If you go into a bakery that doesn’t have a ticket system, for example, you’ll see that there is not a linear queue, but just a chaotic mass of people waiting to be served. Remember that in this situation, you’re responsible for your own destiny. Indeed, it’s up to you to ask who the last in the queue is. And it’s also up to you to check if someone who’s arrived after you is  trying to queue-jump. 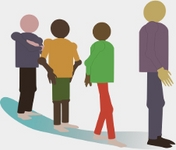 By contrast, if you’re at a bus stop, you’ll always find a chaotic mass of people, but in this case, you’re not expected to queue. However, you’re expected to be prepared for war. In fact, when the bus arrives, no one cares about who arrived at the bus stop first. Everyone just fight to get on the bus as soon as possible. The target? Get a seat, no matter how.

Finally, if you’re visiting churches, cathedrals or other religious buildings, remember to dress properly. Knees and shoulders – for Vatican midriffs and cleavage too – must generally be covered. If you still prefer to wear shorts, you can always bring with you a wide scarf. You tie it around your waist so as to cover your legs before entering a church.

More tips in the next weeks -> Twelve things you should know before visiting Italy (Part 3).
And you? Have you already visited Italy? What do you think about these Italian customs?

La Befana
Next Post: Twelve things you should know before visiting Italy (Part 3)