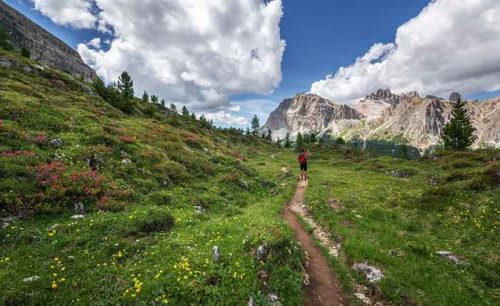 Trentino Alto Adige is one of the most touristic northern Italian regions.

In Trentino you can ski in winter, and do some trekking, ride a bike, or relax in front of a lake in summer, spring and autumn.

Trentino Alto Adige is also one of those Italian regions that still cares about traditional wear.

In Trentino you can usually see people dressed in traditional clothes during special holidays.

Trentino’s traditional wear is very similar to German traditional clothes since South Tirol was part of the Austro-Hungarian County of Tirol until 1918, and afterwards it was annexed to Italy.

Up to the 700 BC, in Trentino Alto Adige people had a different dress code according to the social class they belonged to. For example, farmers could only dress with clothes that were sewed at home with simple materials while nobles and the middle-class could use also materials like silk and velvet.

During the reign of the Emperor Maria Theresa this changed. Indeed, she removed every restriction, allowing everyone to dress how they liked.

Since then, clothes with many different styles were created.

One of the most common traditional clothes used in Trentino alto Adige was called die tracht.

For women die tracht included a white blouse decorated with several laces, a bodice decorated with lace and colored ribbons, a big skirt made of wool, linen or a mixture of both of them, crochet socks and black shoes.

Men, instead, wore a shirt, a colored vest, long or short trousers and large suspenders. They also wore white or colored socks and black shoes.

Both women and men wore also traditional hats. Some of them were small and some others big.

The museum is usually open from 9 to 12.30 in the morning and from 2.30 to 6 in the afternoon. The price of the ticket changes according to your age and goes from 4 to 6 euros.

Have you ever visited Trentino Alto Adige? Did you like it? Did you see people dressed in traditional wear? Are there traditional clothes in your country?