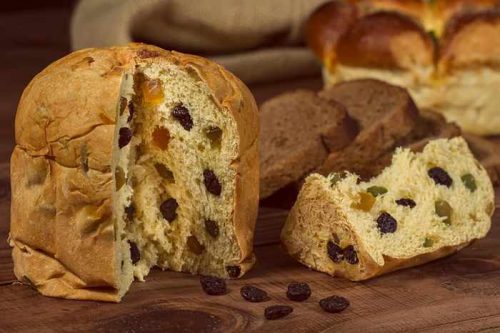 Christmas is the time of the year where families join together, where hope is stronger than ever, where people bring out the best in themselves.

Every country has its own traditions for Christmas – I talked about some Italian Christmas traditions in the last week’s post.

In Italy, for example, it’s typical to eat some traditional Italian sweets during the Christmas holidays. I’m talking about pandoro and panettone – if you haven’t tasted them yet, do it, they’re delicious.

So, today I’m going to talk about the history of these two famous Italian sweets: pandoro and panettone.

The most common story about the origins of panettone is told with some little variants around Italy.

However, all these variants have a common thread: one of the protagonists is always a man called Toni.

I’m going to tell you one of these stories.

During the 15th century in Milan lived a cook who worked for Ludovico il Moro, the Duke of Milan.

One evening the Duke asked his cook to prepare a banquet for himself and his guests. The cook did it. However, he forgot about the dessert in the oven.

So, by the time he opened the oven, the dessert he had prepared to end with a bang had burnt.

The cook was in despair but luckily for him Toni, one of the scullions, was there and offered him the mother yest he had kept aside for himself for Christmas.

The Duke’s cook took the mother yest and started to knead it with some flour, eggs, sugar, raisins, and candied fruit.

He than baked it and served it to the Duke and his guests.

The cake was a great success and when the Duke asked his cook the name of this cake, the cook replied “L’è ‘l pan de Toni”, literally it’s Tony’s bread.

Since then the name evolved into panettone.

Panettone is a very popular cake in Italy during the Christams holidays. It has a cylindrical base and a cupola shape and it’s usually 12 centimeters high – even if the height can change.

Panettone is usually served with a cream made of mascarpone.

If you’re thinking to try to cook panettone at home, think better. Panettone is made during a very long process that takes days.

If you want to eat a good panettone at Christmas, my advice is to buy one in a pastry shop or in a bakery.

Pandoro is the other popular Italian cake Italians eat during the Christmas holidays.

Even in this case there are many versions about the origins of Pandoro, but none of them has a common thread this time.

According to the first version, pandoro was invented in the ‘500, during the Republic of Venice.

The second version, instead, tells that pandoro was the evolution of a typical Veronese sweet, nadalin.

Finally, according to the third version, pandoro was invented in the 18th century in Venice. It was probably an evolution of a typical sweet cooked for the Venetian aristocracy, Pane de oro, literally golden bread.

Unfortunately, there aren’t other details about the origins of pandoro. They remain a mystery.

What is sure, however, is that in 1894 Domenico Melegatti further improved the recipe of pandoro and obtained a patent for it. Then, he started to produce it industrially.

Pandoro is shaped like a frustum with a star section and it’s served with vanilla scented icing sugar over it.

Have you already tasted these two Italian sweets? Which one do you prefer? What are some typical Christmas cakes in your country?