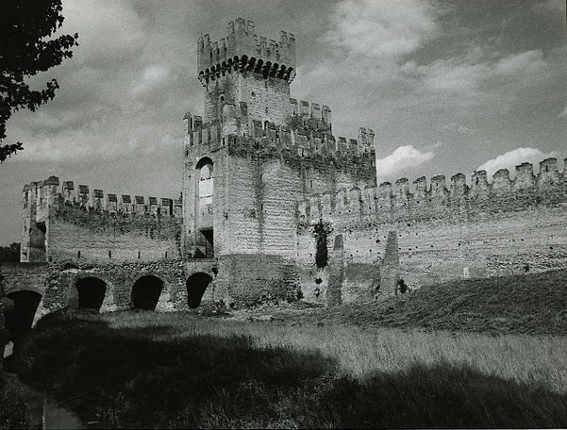 In Italy there’s a lot to see. Indeed, in each if its twenty regions you can find interesting historical and cultural places to visit.

An example of interesting historical and cultural places to see in Italy are Italian citadels. Italian citadels are cities that have preserved their ancient defensive walls.

So, today I’d like to talk to you about three stunning walled cities in Italy that you can visit.

Among all the walled cities in Italy, Palmanova is surely one of the most famous and beautiful.

Palmanova is a town in the Friuli-Venezia Giulia region.

It was built in 1593 to commemorate the victory of the Christians over the Ottoman Turks in the famous battle of Lepanto.

Palmanova was built as a star fort and its form, a nine-pointed star, is also visible from above.

The entire town was surrounded by a moat and it was accessible only through three guarded gates.

The construction of Palmanova took more than 200 years, and the final fortress is composed of 9 bastions, lunettes and ravelines, and of 18 cavaliers.

The town was declared a national monument in 1960.

In Palmanova you can also see the Cathedral, the Civic museum and the Military museum.

Cittadella di Alessandria is an Italian citadel in the Piedmont region. It’s another Italian star fort citadel and one of the best preserved 18th century citadels in the world.

The construction of the citadel, commissioned by King Vittorio Amedeo II, began in the 18th century, right after the Treaty of Utrecht was signed, to protect the new state of Savoy.

The Citadel of Alessandria was built as a six-star hexagon fortress, with several tunnels, casemates, ravelines, and counterguards.

The Citadel was also surrounded by a moat and could only be accessed thorugh a stone bridge.

Other interesting places you can visit in Alessandria are: the Cathedral, Arco di Trionfo, Prati Palace, The hat museum.

Montagnana is another Italian citadel. It’s located in the Veneto region.

The majority of the walls surrounding the town date back to the XIV century, while the others are older.

The walls were built when the Carraresi decided to strengthen Montagnana to protect themselves from the Scaligeri.

The walls are 1 meter thick and reach 8 meters of height.

There is also a moat and 24 towers whose height goes from 17 and 19 meters.

The Citadel could be accessed to the east only from the Castle of St. Zeno and to the west only from the Rocca degli Alberi.
Other places that are worth a visit in Montagnana are: the Gothic Cathedral and Villa Pisani.

And don’t forget to taste the specialty of Montagnana: Prosciutto Veneto PDO.

If you visit the town in mid-May, you can also visit of the famous festival del prosciutto!

Have you already visited these walled cities in Italy? Did you like them?