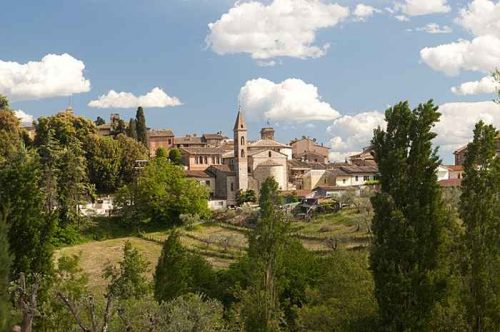 Tourists are usually attracted by big famous Italian cities such as Pisa, Rome, Milan, Venice, and so on.

However, if you are staying in Italy for a while, I suggest you to visit also little towns and villages.

Indeed, in Italy there are many villages, unknown to tourists, with personality and breathtaking views.

In today’s article you’ll discover three Italian mountaintop villages that are definitely worth a visit.

Bagnoli del Trigno is an Italian village in Molise with 700 inhabitants. It’s one of the most fascinating Italian mountaintop villages around Italy.

You can go there just to spend a day away from the hectic city life and to visit some of the most important buildings you can find there such as Pietrabbondante, the Church of Saint Silvestro, and Sanfelice Castle.

Pietrabbondante is an archeological site composed of two temples built in the IV century BC.

The Church of Saint Silvestro was built in the XIII-XIV century between two large spurs rocks, only the side walls are visible. If this is not special enough, the church’s belltower rises from a rock spur.

The castle of Sanfelice was owned by different families during the years and many Counts and important families spent there their time like the counts of Isernia, the Caldoras and the Sanfelices, from whom the castle takes its name.

During the centuries the castle decayed until, in 1985, the last owners decided to give it to the Ministry of Cultural Heritage.

From 1986 on, the castle is being restructured and nowadays you can visit part of it without risks.

Also Altomonte is in the list of the Italian mountaintop villages that you should visit.

It’s located in Calabria and its name, Altomonte, was chosen by the Queen Giovanna II of Naples herself.

In Altomonte, in addition to take beautiful pictures, you can visit the church of Saint Francis da Padova, and the convent of the order of Minims.

The Church of Saint Francis was built in 1363 and the interior was enriched with many important pieces. Nowadays the only things left are the frescoes depicting the miracles of Saint Francis and three paintings.

All the other important pieces are hosted both in the Museo Civico and in the town hall.

Next to the church stands the convent of the order of Minims which was built in 1798 and it’s now the home of the City hall.

In this village, in addition to drink good wine, you can visit some of the many famous villas built there such as Villa di Geggiano, and you can visit Pontignano Charterhouse.

Before being converted into a neoclassical-style palace in 1768, Villa di Geggiano was a farmhouse beloging to the Bandinellis.

In the villa you can see many frescoes depicting the seasons, the Bandinellis and their friends. Almost all the paintings were painted by Ignazio Moder.

The villa has also a beautiful Italian garden with a theater that was used for performances by Vittorio Alfieri.

Nowadays the villa is used as a location for weddings, meetings or special events.

Pontignano Charterhouse was built in 1343, commissioned by the nephew of Cardinal Petroni.

The convent has a square courtyard surrounded by cells which were occupied by the monks until 1810, year in which they were expelled. There is also a small church full of beautiful frescoes.

Since the monks expulsion, different people owned the charterhouse during the years, until in 1959 it was acquired by the University of Siena.

Pontignano Charterhouse is now used for academic meetings and conventions but also as a location for weddings.

Have you already visited these three Italian mountaintop villages? Did you like them or not? Why?