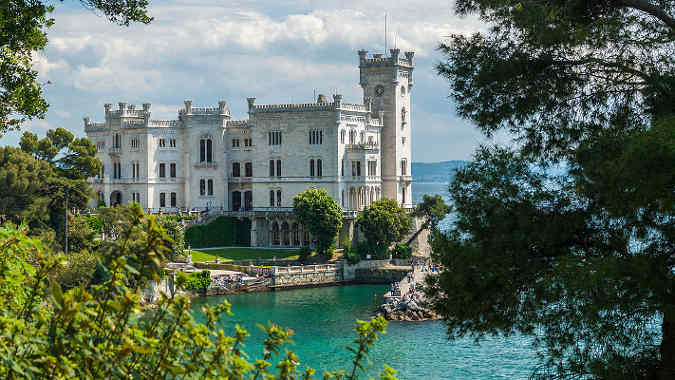 Some people just want to visit them, others want to spend a whole night in a castle, and some others even want to organize their wedding there.

If you plan to visit Italy and are fascinated by castles, you’ll be very happy to know that Italy has a lot of castles to see.

So, in this article I’m going to list 3 beautiful Italian castles you can visit.

Castel del Monte is one of the most famous Italian castles. It’s a World Heritage Site and appears on the Italian one-cent coin – if you’re interested in some other Italian heritage sites, visit UNESCO world heritage sites in Italy, Umbria.

Castel del Monte is a 13th century castle in Apulia. It was built by the Emperor Frederick II in 1240 on a promontory.

This castle has a really peculiar structure. In fact, it is characterized by an octagonal plan, and by octagonal towers. Moreover, it has neither drawbridge nor moat.

In the past, Castel del Monte was used for different purposes. Under Manfred of Sicily, it was used for hunting, under Charles I of Anjou, it was used as a prison, and, finally, during the plague it also served as a refuge.

Originally it had marble colums and marble walls but they were taken by both vandals and members of the Bourbon family and reused in other buildings.

Then, in the 18th century also all the furnishings and the interior marbles were removed.

After years of abadon, luckily in 1876 Castel del Monte was purchased by the Italian state and restored.

If you want to visit it, opening hours change according to the season:

For information visit the official website of Castel del Monte.

Fénis castle is one of the most known Italian castles of Aosta Valley.

The origin of the castle is unknown. But thanks to historical documents we know that in 1242 Fénis Castle was owned by the Challant family.

Actually, at the time it wasn’t really a castle but just a keep.

In 1320 it was then expanded under the will of Aymon of Challant and in 1392 it was further enlarged by his son Boniface, who created in this way the current Fénis castle.

The Challant family owned the castle until 1716, when they had to sold it to Count Baldassarre Castellar of Saluzzo Paesana to pay some debts.

Under Count of Saluzzo the castle was only used as a barn and as a stable and so it started to deteriorate.

Luckily, the architect Alfredo d’Andrade purchased Fénis Castle in 1895 and started its restoration.

Then, in 1935 the castle underwent a second restoration and the rooms were furnished with wood period objects.

Nowadays the castle is a museum. It has three floor but the second one, the one where the servants slept, cannot be visited.

You can visit only the ground floor and the first floor.

In the ground floor you’ll see the kitchen, the woodshed and the weaponery.

Instead, in the first floor you’ll see the chapel with some frescoes by Giacomo Jaquerio and the lords’ rooms.

The price of the ticket usually varies from 2€ to 7€.

Opening hours, instead, change according to the season. For information, visit the official website of Fénis Castle.

Miramare castle is definitely one of my favourite Italian castles. It is the perfect place to visit if you want to immerse yourself in the 19th century.

It’s was built in the 19th century under the will of the Austrian Archduke Ferdinand Maximilian in the Italian region Friuli-Venezia Giulia, in front of the sea.

Miramare castle was built by an Austrian architect and it is a mixture of both Austrian, German and English style.

The interior has still the original furnishings, objects and ornaments of the 19th century.

During the first world war the furniture and the works of art were moved to some Austrian palaces in order to protect them. They were then returned in 1926.

During the second world war, the castle was firstly occupied by German troops, then by New Zeland troops, by British troops and, finally, by American troops.

After the war the Italian government started the works of restoration and in the second half of the XXth century the castle was reopened to the public.

The castle is surrounded by a park called Miramare park.

The park was built around 1856 but it wasn’t conceived as a park at all. Indeed, it was conceived simply as a private garden, a place where the archduke and his wife could relax.

Nowadays in the park there are different species of trees like sequoias, cedars, ginkgo bilobas,  spruces, and so on.

In Miramare park you can also see the Castelletto, a small building that was used as a residence of the Archduke Ferdinand Maximilian and his wife while the castle was being built, the ruins of Saint Canciano chapel, and the greenhouses.

The opening hours of the castles are generally from 9am to 7pm.

Instead, the opening hours of the park change according to the season. For information visit the official website of Miramare castle.

The price of the ticket usually varies from 0€ to 8€.

What about you? Have you already visited some Italian castles? Which ones did you like the most?

Six reasons why you didn’t pass the exam Cils, Celi and Plida
Next Post: Learn to speak Italian with Italian songs