Many tourists when come to Italy visit the most famous city like Rome, Milan, Florence, Pisa, etc. 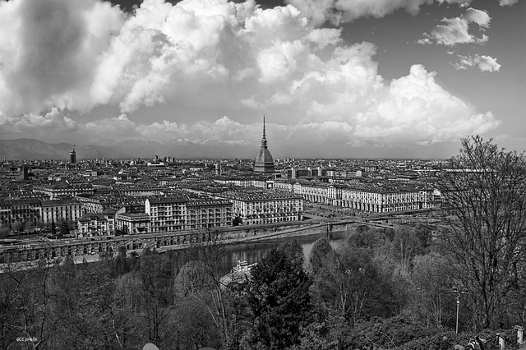 However, really few of them know that Turin, the largest city in Piedmont, is rich of interesting places to visit.

Turin has been a literary center of great importance in 19th century and many intellectuals and artists like Alexandre Dumas, Cesare Pavese, Puccino Rossini and Nietzsche visited it.

Turin is full of historic cafès where some of the intellectuals above mentioned were habitués.

Turin is the city where gianduiotto, a typical chocolate whose shape is similar to an upturned boat, was created.

However, Turin offers a lot more. Today I’ll present you the first three places to visit when in Turin.

Have you ever seen the two-cents Italian euro coins? Well, on the reverse of this coin you can see the symbol of Turin, the Mole Antonelliana.

The Mole Antonelliana takes its name from Alessandro Antonelli, the architect who built it. Its construction started in 1863 and ended in 1889.

The Mole Antonelliana was initially conceived as a synagogue for the Jewish community. However, in 1876, the community decided to withdraw from the project due to the extremely high costs. And the city of Turin decided to take over the project.

The building was dedicated to Victor Emmanuel II, the first king of a unified Italy.

The Mole Antonelliana is 167.5 meters high and was built without a steel girder skeleton. This makes the Mole the tallest unreinforced brick building in the world.

Nowadays it houses the National museum of cinema – the tallest museum in the world.

The museum develops on five levels. In it you can see, among others, pre-cinematographic optical devices, film technologies, Italian stage items, and pictures.

The museum hosts also several film festivals, among which the Torino Film Festival is the most famous.

In the museum you can find also a panoramic elevator with transparent glass walls that offers you a panoramic view of the city of Turin.

If you want to visit the Mole Antonelliana, here you can find the information you need.

CASTLE AND PARK OF VALENTINO

The Castle of Valentino is situated near the Po riverside.

It was built under the will of Christine de France, Duchess of Savoy, in the XIII century.

It has a horseshoe shape with four towers and an inner court with a marble pave.

It seems that it’s name, Valentino, derives from a little Church which stood nearby and were the relics of the Saint Valentino were kept.

In 1564, the castle was bought by Duke Emmanuel Philibert of Savoy and became one of his residences.

In 1820, it became a barracks, then a an engineering school and finally the seat of the Architecture Faculty of the University of Turin.

The Castle is also an UNESCO World Heritage Site.

The castle is surrounded by a large public park, called Park of Valentino. It is the second largest park in Turin, after Pellerina park, and it was the first public garden opened in Italy in 1856.

In the park you can enjoy, among other things, botanical gardens and a reproduction of a medieval castle and village – built for the Universal Exposition in 1884.

If you want to visit Castle of Valentino, here you can find the information you need.

Instead, if you want to visit the Medieval castle, click here.

Italian grammar – Difference between essere and stare
Next Post: How to choose a good Italian translator for your book