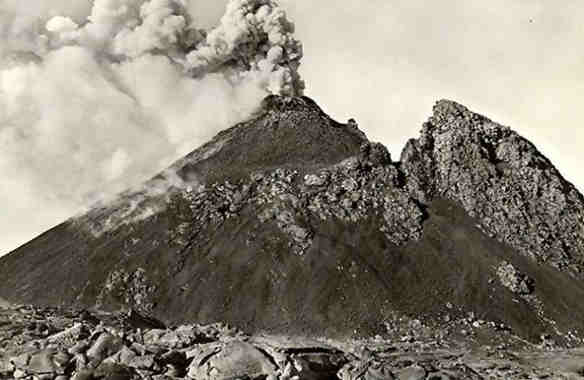 Italy has many volcanoes. Despite this, there aren’t many Italian volcanoes that are famous in the world.

But surely, among the Italian volcanoes, Mount Vesuvius is the most known, both in Italy and abroad.

Mount Vesuvius is located in the Gulf of Naples and it’s actually one of the most active Italian volcanoes.

Vesuvius has a long history of eruptions. However the most famous one, is definitely the eruption that happened in 79 AD.

Indeed, it was the eruption of 79 AD that was responsible of the destruction of the famous cities of Pompeii and Herculaneum.

Some days before the eruption, small earthquakes struck the area of the gulf of Naples. This was probably the hint that Mount Vesuvius’ activity was starting again.

However, since earthquakes were pretty common there, the inhabitants of the area didn’t worry and didn’t even consider leaving the cities.

So doing, they were hit by the most powerful eruption of Mount Vesuvius, eruption that lasted almost two days.

Mount Vesuvius started to erupt at midday, throwing up a column of ash. This was the only period of time in which people who realized how dangerous the situation was could escape from the cities.

During the night pyroclastic flows began erupting and soon covered the near cities.

Nowadays you can get an idea of the fury of the eruption visiting the sites of Pompeii and Herculaneum, where you can see also the impressions of the bodies of the victims of the eruption.

In 1906 another eruption killed more than one hundred people.

Then, in the middle of the second world war, another eruption of Mount Vesuvius struck the gulf of Naples, destroying more than three villages.

This was the last eruption of Mount Vesuvius.

Despite this, Mount Vesuvius is still considered an active vulcanoes. For this reason, and because of its proximity to the big city of Naples, nowadays Vesuvius is one of the most dangerous Italian vulcanoes.

The area of Mount Vesuvius became a National park in 1995.

Nowadays the area can be visited and it’s one of the most touristic places in Italy.

Tickets prices range from 8 to 10 euros – for information visit the website of the Vesuvius guides.

You can go to the top by car. All the vehicles stop at 200 m. from the top. From there, you’ll have to walk.

Don’t forget to bring sun screen, water and warm clothes, since it’s definitely colder up there.

What about you? Have you ever visited some Italian vulcanoes? Have you been to mount Vesuvius? Did you like it?

Learn to speak Italian with Italian songs
Next Post: How to express opinions in informal Italian