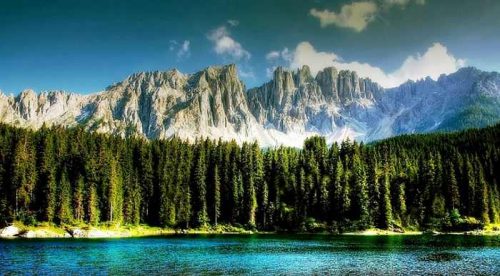 Italian legends usually change from region to region and are also often linked to real places in Italy.

So, if you’re in Italy this year and want to visit some places, be aware that each one of them might hide a legend.

In this article you’ll learn two of the Italian legends you can hear if you travel in northern Italy.

The first place linked to a legend in northern Italy is Saint-Martin bridge in Valle d’Aosta.

The legend says that in the past there wasn’t any bridge that linked the town of Pont Saint Martin to the near town of Carema.

The inhabitants of the two towns had tried more than once to build a bridge but somehow the bridge always fell during the night.

One day, a new bishop came to the town of Pont Saint Martin. When he heard the story of the bridge, he soon understood that the devil had a hand in it.

So, he decided to make a deal with the devil.

The devil would allow the inhabitants of the two towns to build a bridge, provided that they offered him the first soul who crossed the bridge.

The deal was signed and the bridge was built.

However, there was still a price to be paid and the devil was waiting for it on the bridge.

All of a sudden, the bishop threw a loaf on the bridge and released a ravenous dog. It was the first soul to cross the bridge and the one that the devil was forced to take.

Furious for being tricked, the devil made a hole in the bridge and returned to hell.

The bishop soon blessed the hole and ordered to built a chapel on it. Nowadays, both the chapel and the bridge still stand.

The second place linked to a legend in northern Italy is Carezza lake in Trentino-Alto Adige.

Long time ago, a beautiful nymph lived in Carezza lake. She used to sit on the shore and sing.

One day, a sorcer who was passing near the lake, heard her voice and, intrigued, decided to discover to whom belonged it.

When he caught a glimpse of the nymph, he immediately fell in love with her.

However, he knew quite well that nymphs were very shy and he had first to find a way to seduce her if he wanted to approach her without scaring her.

So, he decided to ask for advice to a witch, who told him to dress up like a jewel merchant and cast a beautiful rainbow. The nymph, curious about the rainbow, would get out of the water.

The next day, the sorcerer went to Carezza lake and created the rainbow. As expected, the nymph, curious, got out of the water.

The sorcerer, tried to approach her, but he didn’t realize he had forgotten to dress up like a jewel merchant.

The nymph saw the sorcerer and, scared, disappeared in the lake.

The sorcerer was furious and smashed the rainbow, which fell into the lake and spread all its colours on the lake’s surface.

This is the reason why nowadays the surface of Carezza lake has many different colors.

Did you already know these two Italian legends? Is there any famous legend linked to a place in your country?