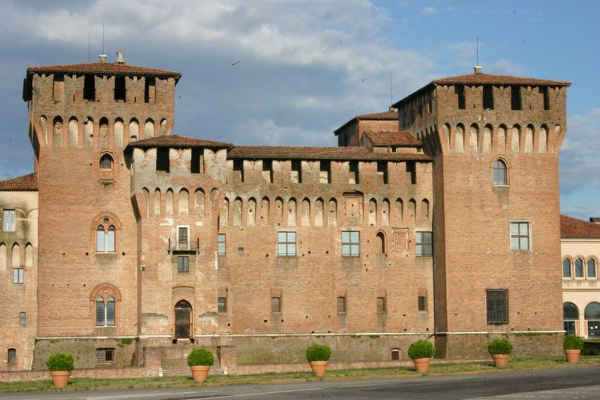 Italy is widely known for food, fashion and for its cultural richness. However, when coming to Italy, tourists tend to visit always the same Italian cities: Venice, Rome, Pisa, Florence, etc. These are surely cities full of history and of beautiful buildings to visit. However, there are also other Italian cities – usually not so well known by the majority of tourists – that might definitely surprise you.

One of these Italian cities is Mantua.

At the time, the Gonzagas were one of the most important pricely families in Italy and they were able to transform Mantua in one of the main artistic and cultural hubs in Europe.

There are many buildings you can visit in Mantua, but today I’m gonna talk about only two of them.

Palazzo del te was built by the architect Giulio Romano in 1524 for the Gonzaga family. Indeed, the Gonzagas wanted a calm place to relax and meet friends.

For almost ten years many carvers and painters were hired to decorate the surfaces of the palace.

The result is that each room presents different features and artistic works.

The palace has more than twenty rooms but, surely, two of the most famous ones are Camera dei Giganti and Camera di Amore e Psiche.

A long time ago, there were giants who wanted to replace the Gods. For this reason, they tried to conquer Mount Olympus. To do so, they put together Mount Pelion and Mount Ossa and then started the climbing. But the king of the Gods, Jupiter, decided to punished them by hitting them with lightnings.
When you enter the room of giants you can see several beautiful frescos depicting this story, which, by the way, was based on a tale narrated by Ovid in the Metamorphoses.

This room was used to receive the most eminent guests. It is called Cupid and Psyche because on its vault, it’s depicted the love story of these two characters, as narrated by Apuleius in The metamorphoses.
In Cupid and Psyche room there are also other frescos mainly depicting mytological love tales like the one concerning Jupiter and Olympias, Mars and Venus, etc.

Saint George castle is one of the most beautiful buildings to see in Mantua.

The castle was the residence of Isabella d’Este, one of the most eminent women of the Italian Renaissance.

Isabella used to invite to this castle many artists like Leonardo da Vinci, Ludovico Ariosto, Andrea Mantegna,  etc. In this way, she transformed Mantua in one of the main artistic and literary hubs in Europe.

Among the most famous rooms in Saint George castle there is camera degli sposi – the bride and groom room.

This room was painted by Andrea Mantegna and presents some frescos depicting the Gonzaga family, and some others depicting mythological tales like the myth of Orpheus, the labours of Hercules, and so on.

The castle is opened from Tuesday to Sunday from 8:15 am to 7:15 pm. For information and prices visit the website of Castello di San Giorgio.

What about you? Have you ever visted Mantua? What other Italian cities have you visited?

Passive sentences in Italian
Next Post: Six mistakes to avoid when hiring a translator