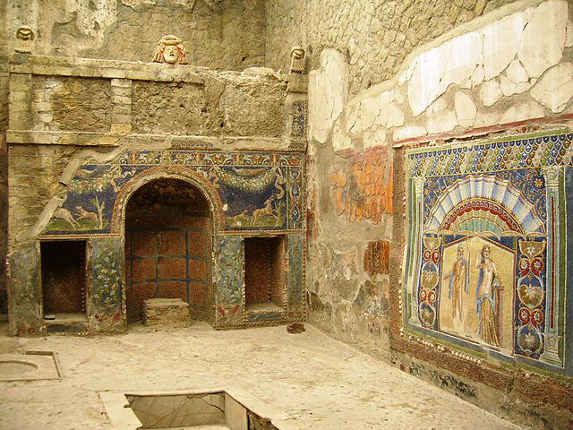 Herculaneum is pretty famous all around the world because of its tragic story.

Indeed, Herculaneum was a lovely town near Mount Vesuvius that, together with Pompeii, was destroyed by a volcanic eruption in 79 AD.

Nowadays you can still visit Herculaneum ruins by visiting the UNESCO archeological site of the same name located in the Campania region.

The interesting fact is that, before the eruption of 76 AD, Mount Vesuvius had had no activity for 800 years. So, the inhabitants basically considered it an inactive volcano.

The first eruption happened around 1pm with the spewing of ash, gas, and pumice stone.

This eruption involved mostly the area of Pompeii, where it started to destroy some parts of the city such as roofs, and was responsible of the first deaths.

Herculaneum, instead was barely involved in this eruption. Indeed, and on it fell only few centimeters of ash. This was enough to scare the inhabitants, leading them to leave the town.

Herculaneum was then hit by a pyroclastic surge, a mixture of incandescent gas, ash and water vapor, the following night. The surge reached the speed of 160km/h and the temperatures reached 250 C°.

Luckily most of the inhabitants managed to escape hours before but the ones who remained died because of the heat.

The buildings and the bodies weren’t destroyed but were buried under more than 20 meters of ash and lava.

It was only in the 18th century that some explorations allowed to discover the first remains of the ancient city of Herculaneum.

The first official excavation to find the remains of Herculaneum began in 1738 and was supervised by Roque Joaquin de Alcubierre, a Spanish engineer.

Since then there have been some other excavations but, despite this, it seems that the 75% of Herculaneum ruins are still buried.

Nowadays you can see the remains of different houses like the house of Aristides, and the house of the Alcove whose atrium still has the original flooring.

You can also see many other buildings such as the central thermae, the gym, the theater and the famous Villa of the Papyri. In this villa, many papyrus scrolls have been found, and they are now stored in the Naples’ National library.

Herculaneum ruins, together with those of Pompeii can be visited all the year. For more information, please visit the official website of the Pompeii sites.

In 1981, fifty five skeletons were found during some excavations. The high number of skeletons found startled the researches who, until then, were absolutely sure that nearly all the inhabitants of Herculaneum managed to escape from the town in time.

The skeletons were found near the beach, thing this that led the researchers to suppose that these people were waiting to be rescued when the surge reached them.

Nowadays many artefacts and casts of the skeletons can be seen at the National Archeological museum in Naples.

Another place you should visit if you’re in Campania is the MAV, the vitual archeological museum. It’s one of the best Italian virtual museums and in it you can also see a 3d reconstruction of how Hercolaneum was before the eruption.
Did you already visit Herculaneum ruins? What do you think about them?

Do you know the meaning of these Italian slang words?
Next Post: Five common Italian words misused by English speakers