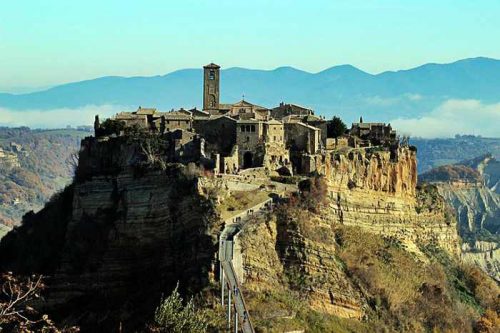 Italy is visited by millions of tourists every year. They come for its astonishing buildings, historical places, food, Italian culture, etc.

However, having usually little time at their disposal, tourists tend to visit the most famous places like The Colosseum, The Tower of Pisa, and so on.

These are definitely wonderful Italian places that are worth a visit but are also definitely crowded.

So, if you’re already been to Italy and want to see something new and a little bit less crowded, today I’ll give you a list of four Italian undiscovered destinations.

Rocca Calascio is the number one in my list of the Italian undiscovered destinations.

This Rocca is located in the town of Calascio, Abruzzo.

It stands at 1,640 metres and it’s the highest fortress in the Appennines, as well as part of Gran Sasso national park.

It was originally built in the tenth century for military purposes, as a watchtower.

Then, three centuries later a courtyard and four towers were added.

Near the tower stands the old village of Calascio that was almost completely abandoned in 1703 due to an earthquake that badly damaged both the town and the rocca.

Nowadays some of the houses and structures of the old village have been rebuilt and Rocca Calascio can be visited freely.

Also Civita di Bagnoregio deserves a place in the list of the Italian undiscovered destinations.

Civita di Bagnoregio is a town in Lazio.

Civita was founded 2500 years ago by Etruscans and was the hometown of Saint Bonaventure.

In the 16th century the town started to decline and in the 17th century it was completely abandoned due to an earthquake that seriously endangered the town.

Due to the earthquake, the population moved to the near town of Bagnoregio.

Nowadays Civita di Bagnoregio is visited for its historical importance and for its position.

However, the town stands on a plateau of friable volcanic tuff and, due to erosion, it is constantly in danger of destruction.

Also Scarzuola is a place that is definitely worth a visit.

Scarzuola is in Montegiove, Umbria and it’s especially known for two things: an old convent, where Francesco d’Assisi spent part of his life, and a “theater city” built in the XX century by the architect Tomaso Buzzi.

In this article I’ll talk about the second one.

Tomaso Buzzi decided to built an ideal town that represented his concept of life.

So, he built behind the convent a set design composed of seven different theatres plus an Acropolis.

In the Acropolis you can see in reduced scale the Parthenon, the Colosseum, the Triumph Arch, the Pyramid and some other famous buildings and monuments.

For information and to book a visit, have a look at the official website of Scarzuola.

THE SHRINE OF MADONNA DELLA CORONA

The last Italian undiscovered destination in today’s list is the shrine of Madonna della corona.

The shrine of Madonna della corona is in Spiazzi, Veneto.

The church was built in the XVI century and in the XVII century it was transformed into a shrine.

To get to the shrine you can choose among two roads. You can climb a staircase that begins in the town of Brentino in Valalgarina or you can follow an asphalted road that begins after the town of Spiazzi – this road is accessible only on foot.

Once you get to the shrine you’ll find also the Scala Sancta – holy stairs. It’s a reproduction of the stairs of the same name in Rome.

These stairs are the ones on which Jesus stepped on his way to trail during his Passion.

If you want to climb these stairs, there’s a tradition you have to follow:

– You should dip your fingers into the holy water font and make the sign of the cross.
– Then, you should climb the stairs only on your knees while praying God and thinking about his Passion.

If you want to visit the shrine of Madonna della Corona, have a look at its official website.

Did you already know these Italian undiscovered destinations? Have you already visited them?