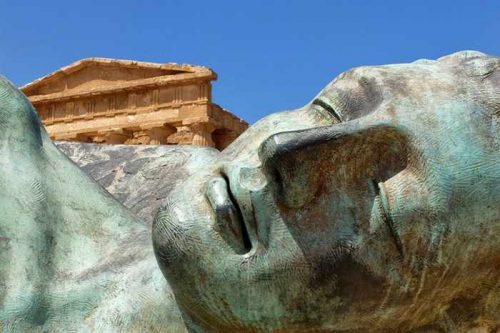 One of the best periods to visit Italy is during spring and summer. In Italy there is a wide range of things that you can do and see, for example there are many archeological Italian sites you can visit.

So, in this article I’m going to list four beautiful archeological Italian sites that you can see during your holidays in Italy.

1. VALLEY OF THE TEMPLES

If you’re in Sicily, Valley of the temples – La valle dei templi – is a must to see. It’s one of the best examples of Greek architecture in Italy and is also a UNESCO World Heritage Site.

The Temple of Concordia is well preserved and is one of the most important Greek temples existing today.

In the Valley of the Temples you can also see some necropolies, a sanctuary and at least two archaic temples.

Several sarcophagi have the image of the deceised carved on them while some others are decorated with symbolic or mytological paintings.

Moreover, some of the walls of the tomb-chambers are decorated with frescoes, some of them depicting the dead during its journey to the beyond.

Ancient Ostia – Ostia Antica – is an archeological site not far away from Rome. And there’s a reason for this because Ostia might have been the very first colonia of the Rome Empire. It was then abandoned right after the decadence of the Roman Empire. The first excavations were undertaken in 1939 and brought to light many remains that are now hosted in the Ostiense museum.

They didn’t found only ancient objects but also well preserved historical buildings like inns, shops, public baths, taverns, and a theater, as well as preserved frescoes and mosaics.

Among the many archeological Italian sites also Hadrian’s villa – Villa Adriana – is a must to see.

Hadrian’s villa is in Tivoli and it’s a UNESCO World Heritage Site.

The villa was constructed for the Emperor Hadrian. Indeed, at the time it was common for Emperors to have a private villa where they could spend some time to relax.

During the last years of his reign, Hadrian even governed the empire from the villa.

After the decline of the Roman Empire, the villa fell into disuse and many statues and other objects were taken away.

In the 16th century, even Cardinal Ippolito II d’Este decided to take some statues to bring them in his own villa, Villa d’Este.

Nowadays Hadrian’s villa contains more than 30 buildings, including pools and baths. Many artifacts have been unearthed such as marble sculptures, mosaics and some artworks.

Have you ever visited one of these four archeological Italian sites? Did you like them?