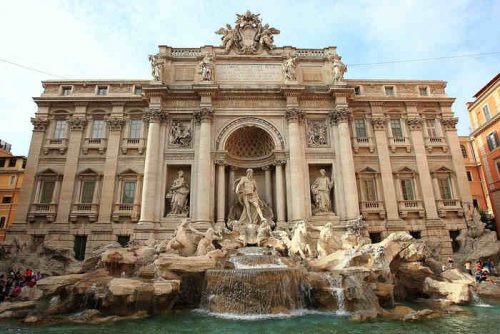 Are you particularly unlucky in this period? Are you in Italy? Don’t worry! In this article you’ll find some solutions to get rid of bad luck.

In fact, in Italy in addition to small objects and gestures that bring good luck, you’ll find also some famous places where people say you can get rid of bad luck for a very long time.

The most famous place in Italy to get rid of bad luck is Trevi fountain in Rome.

The fountain was designed by the architect Nicola Salvi in baroque style. It’s 26 meters high and 49 meters wide and it’s one of the most beautiful structures in Rome.

According to tradition, if you throw a coin in the fountain with your right hand over your left shoulder, you’ll get rid of bad luck.

More or less 3,000 euros are thrown into the fountain each day. If you’re now thinking of stealing some of the coins, think twice: it’s definitely illegal!

The Galleria Vittorio Emanuele II is the most famous arcade in Milan. It was designed in 1861 by the architect Giuseppe Mengoni and built from 1865 to 1877.

Underneath the arcade, more or less, in the middle of it, there are four mosaics portraying the coat of arms of Milan,Turin, Florence, Rome.
The coat of arms of Turin is a bull. And the tradition says that if you manage to spin three times with your heel on the testicles of the bull, you’ll get rid of bad luck.

Another place where you can find good luck is the house of Juliet.

The house of Juliet is a medieval building in Verona. It has become famous thanks to William Shakespeare who, inspired by reality, wrote one of his most famous masterpieces, Romeo and Juliet.

Near the house you can find the statue of Juliet. The tradition says that if you rub Juliet’s right breast, you’ll get rid of bad luck.

If you go to Florence, you’ll see that one of the main attractions is the bronze fountain of a boar.

In Florence it’s called the piglet, il porcellino. The original statue was realized by Pietro Tacca in the XVII century and it’s now hosted in Stefano Bardini Museum. The popular attraction tourists can see today is just a copy.

According to the tradition, if you rub the boar’s snout, you’ll have plenty of good luck.

Another practice is that of placing a coin into the boar’s jaws with the idea of letting it fall through the underlying grating. If it falls through the grating you’ll have good luck.

THE FOUNTAIN OF TITS

The fountain of tits was built in 1559 in Treviso, due to the drought that struck the city at the time.

Every year, until 1797, in honor of every new Podesta, from the fountain came red wine from one nipple and white wine from the other.

And for three days, all citizens could drink that wine for free.

Nowadays, the original sculpture is hosted in Zignoli palace. The one that attracts millions of tourists is just a copy.

The tradition says that if you rub Juliet’s right breast, you’ll have good luck.

Are there special places where you can get rid of bad luck also in your country?

How to use Italian passato remoto
Next Post: Five Italian slang words