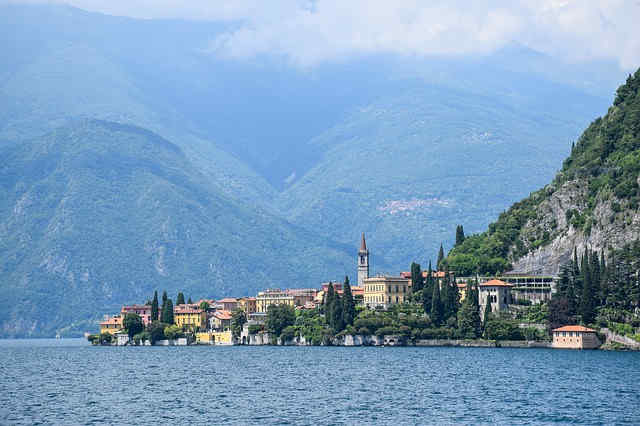 Italy has many different attractions to see. Many tourists, for example, come to Italy to visit the area of lake Como.

This area is becoming more and more famous also among American actors, so much so that in 2002 George Clooney bought a wonderful villa there.

On the shores of this lake you can find among others peace, a beautiful landscape, small traditional villages, and many historical villas.

In this article I’m going to talk about five historical Italian villas you can visit near lake Como.

The villa was built in the XVIII century for Cardinal Durini. It was erected on the ruins of a Franciscan monastery and it still has the two old bell towers, that have been transformed into two towers during the years.

When Cardinal Durini died, the villa passed to his nephew, Luigi Porro Lambertenghi, who used to invite there many personalities of the time like Silvio Pellico.

Since then, the villa was first sold to Giuseppe Visconti, then to the American Butler Ames, and finally to Guido Monzino.

Monzino, who was a famous Italian explorer, mountaineer, and leader of the first Italian expedition to Mount Everest, completed the villa with several collections and objects that he found during his expeditions.

When he died, he left the villa to the FAI, Fondo per l’ambiente italiano.

In Villa del Balbianello have been shot parts of some films like Piccolo Mondo Antico, La Certosa di Parma, Jackpot, A Month by the Lake, Casino Royale, His Demise, and Star Wars: Episode II Attack of the Clones.

Villa d’Este is a beautiful villa of the XVI century located in Cernobbio, near lake Como.

In 1442 there was a female convent exactly where the villa is standing now. It was founded by Gerardo Landriani, the bishop of Como.

However, just a century later the Cardinal Tolomeo Gallio decided to demolish the convent to build a big residence for himself that was called Villa Garovo.

When Cardinal Gallio died, the villa was sold different times until it was acquired by the Calderari family.

The family decided to restore the villa, adding also a big park which included a temple and a nymphaeum, a monument dedicated to the nymphs.

When the head of the family died, his wife Vittoria Peluso married Count Domenico Pino and she decided to build a mock fortress in his honour in the park.

In 1815 the villa changed its owner and was bought by Caroline of Brunswick. She decided to rename it Nuova Villa d’Este and to change the style of the park, organizing it in an English style.

Finally, in 1873 the villa was transformed into a hotel for noble families.

The only way you can visit this villa today is by sleeping in one if its rooms…if you can afford it. Prices start from €1000 per night.

Villa Melzi is another beautiful Italian villa located in Bellagi, near lake Como. The villa was built in the XIX century for the duke Francesco Melzi d’Eril.

Many different artists of the time were called to decorate both the exteriors and the interiors of the villa.

The villa is surrounded by majestic gardens in English style which include different monuments like Egyptian statues, a Venetian gondola, and also many rare and exotic plants.

In the gardens you can find also a museum showing different relics such as sculptures, archaeological finds, frescos and cannons.

Finally, walking in the gardens you’ll see the family chapel, a temple built in the neoclassical style with frescos by Angelo Monticelli.

Unfortunately you cannot visit the villa, but you can the gardens. For more information, please visit this page about Villa Melzi d’Eril.

The villa was built in the XV century for the Sfondrati family and since then it changed many owners and was rebuilt and reconstructed many times.

In 1788 it was bought by Alessandro Serbelloni who added many decorations and works of art of the XVII and XVIII century. He also improved the gardens, building paths and roads suitable for vehicles.

When Serbelloni died, the villa was inherited by his sons and heirs, and in 1907 it was sold to a Swiss society that transformed it into a hotel.

Later on the villa was bought by the princess Ella Walker who passed it on to the Rockfeller Foundation of New York.

Since then in the villa have been organized many international conferences.

Nowadays the only parts of the villa you can visit are the gardens.

Among the Italian villas on the shores of lake Como, Villa Carlotta is a must-to-see.

This villa was built for the marquis Giorgio Clerici in the XVII century.

In 1975 the villa was passed to Giovanni Battista Sommariva, a close friend of Napoleon, who added many sculptures and works of art.

Then, in 1843 the villa was passed to Charlotte, Duchess of Saxe-Meiningen. Charlotte’s father improved the gardens of the villa adding rhododendrons, camellias, cedrus, sequoias, and several exotical plants.

After World War I the villa was confiscated by the government arguing that it was of national significance.

Nowadays both the villa and the gardens can be visited. For information about opening hours, tickets and prices, please visit the official website of Villa Carlotta.