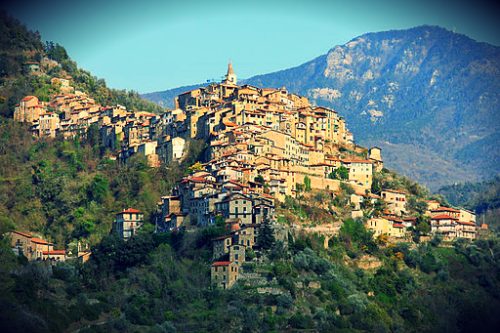 Italy is famous abroad for its culture and history. Tourists from all over the world come and visit the most popular towns such as Venice, Rome, Florence.

However, in Italy there are also many beautiful Italian villages that are still unknown to tourists and where time almost seems to have stopped.

So, today I’m going to talk about four beautiful Italian villages that are definitely worth a visit.

The first of these beautiful Italian villages is Neive.

Neive is a small Italian town in Piedmont. Its population is only around 3,400.

In Middle Ages both a monastery and a castle were built in the town. However, nowadays, unfortunately, none of them exist any more.

The castle was destroyed in 1276, during one of the battles between the city of Asti and Alba. The only part that remains is a tower.

Instead, all that remains of the monastery are the sacristy and the bell tower.

When you walk down the square of Neive, you almost get the feeling of being in a Medieval town with its narrow-cobbled streets.

Oriolo is another beautiful Italian hamlet to visit. Oriolo is in Calabria, it’s located at an elevation of 500 meters, and only counts 2,122 inhabitants.

Originally the town was built as a fortress. Citizens came here to seek refuge from Saracens’ raids.

Some of the most interesting places to see in this town are surely the remains of the castle, and the Church of Saint George, which stands near the castle.

Among the beautiful Italian villages to visit, there is surely Apricale.

Apricale is a really small town in Liguria which counts 620 inhabitants.

The town was built around the X century by some counts.

In 1267 what are now considered the most ancient Ligurian laws were created in Apricale. These laws were in some cases pretty harsh and regulated the main aspects of everyday life: marriage, murder, theft, etc.

If you visit Apricale, don’t forget to see the most important Church there, Chiesa della Purificazione di Maria Vergine, built in the XIII century and hosting frescos painted by Leonida Martini.

One curious thing is the presence of a bike in the tower bell of this church. It’s an artwork by the contemporary artist Sergio Bianco.

Another building to visit in Apricale is the Castle of the Lizard. The castle was built during the X century by the counts who built the town of Apricale. Nowadays the castle is used to host exhibits and cultural events.

Among all the beautiful Italian villages in this list, Vigoleno is surely the most beautiful and the one that makes you feel as you were still in the XII century.

Vigoleno is a small walled town in Emilia-Romagna. It was built during the X century, it has narrow roads, a beautiful square and ancient buildings.

One of the things you surely should visit in this town is the incredibly well-preserved castle.

For information about opening hours and tickets’ prices see the website of the city of Piacenza.

Now I’m curious. Have you ever visited some beautiful Italian villages that you particularly loved?